Somewhat unexpectedly, I am here to introduce myself as acting Outreach Director for F.E.A.S.T.

Once upon a time, I set out to build a career in the way that I thought adults did; I chose a subject to study - law - and got myself a degree. I wasn't sure I wanted to practice law, so found a job that liked the degree, but didn't actually need it - industrial relations. Then I met and married someone whose own career took an unexpected turn and sent them to the Far East, and I went too, as what was known at the time as "a trailing spouse" - and, as career turns go, being described like a genus of ivy and denied employment opportunity is not a high spot! - I can see that now.  But then I was young, and starting a family, and it was an adventure.  And I made lifelong friends while there and, with three beautiful babies to have fun with, it was a magical time, and maybe career paths don't have to be predictable.  Seven years later, with three young children in tow (two girls, one boy), I returned to the UK and have been based ever since back where I grew up, south west of London.  I "retrained" - as a cook and teacher - and can still be found in shady corners of the internet blogging monthly cooking articles for a niche local publication and doing contemporary research on all things culinary via Twitter.  Hardly a good look for the mother of a child who went on to develop an eating disorder, maybe, but nevertheless that is what I am, and where I was, in my potted career history, before I had need to find F.E.A.S.T.

Falling down the Rabbit Hole…

In 2008,  my middle child was diagnosed with an eating disorder.  She was 16; we were clueless.  I went through three stages of diagnosis within the first fortnight.
And at Stage 3, I thought to google “how to feed an anorexic”, which brought me, eventually, to the wisdom of Laura Collins (as she was then known in this world).  Namely, I was brought to the back page transcript of Laura’s seminal work “Eating with Your Anorexic” - recently re-issued and still with everything to recommend it.  Titled: “Parent to Parent: What I’d Say to You Over Coffee (And a Slice of Baklava)”,  anyone who hasn’t already read it - go back to square one, now! -  it changed everything for us.

Laura Collins (now aka Laura (Collins) Lyster-Mensh) founded the Around the Dinner Table forum, and it is there that I first met her properly, along with a group of other broad-shouldered confidantes who were prepared to listen to my woes and offer me the benefit of their hard-won wisdom “for what it was worth” (and for the record - it was worth rubies - it was worth my daughter’s recovery, and it was worth her life).  They gave me hope, they gave me reason to believe in treatment and recovery, they gave me a job to do, and they helped me and my family ask the right questions and figure out how to work with our treatment team to form a plan that would work for us.  And more, they helped to hold my hand and keep me focused, facing forward, on track: every; single; day, through that process.

Out of the tunnel

My daughter recovered.  In spite of my misgivings at the capacity of our particular “team family” to be able to pull all in the same direction, all of the time, all together, and doing all “the right things”; in spite of my British style of parenting believing in encouraging early independence and a tendency to hero worship, and unquestioningly follow the opinion of, anyone telling me anything in a medical setting; in spite of the particular personality of my daughter (much smarter than me - a trait that an eating disorder can turn to its very best advantage!).  In spite of all the weaknesses that I perceived in “us” or in our system, she recovered - and has stayed recovered - since 2010.  By which time I was cemented in place on that forum - as a moderator, as a member, as a friend of many who were there.  I have since then taken on a little more responsibility - as a board member for F.E.A.S.T., as secretary to the board, as chair this last year as we manage a period of change, and now as acting Outreach Director while we work to make transition and find the priorities for the next phase of F.E.A.S.T.

I have also been very proud to work with the team at Charlotte’s Helix these last few years - Helen Missen, Sue Shepherd and I started out as the "three musketeers" tasked with making the Charlotte's Helix project an official UK charity after we lost our dear friend, and ATDT stalwart, Charlotte, and with co-founder Laura stepping into an advisory capacity back home in the US.  We planted a flag with Charlotte's name on it, and carried on the work that F.E.A.S.T. had been supporting her in pursuing; to enable the UK to be included in ground-breaking, global, biological research.


I have been the chair of Charlotte’s Helix since it became a registered UK charity, with a full team of trustees, and it has been a wonderful, rewarding, and educational few years.  We have had some great times staging some very special events to raise funds and support, and have enjoyed showing up at conferences and gatherings, making new friends, hearing stories, and introducing others to the scientific team that we have been working in partnership with at Kings College London, and to their work as part of the AN25K challenge.

We have been touched by the generosity and heartened by the enthusiasm of all those coming forward to offer their DNA to the project.


We have also been lucky enough to intrigue some big names in the media (the BBC has come calling, several times, wanting to know more and to help spread the word), we have raised a signficant sum of money to support UK involvement in research that would not otherwise have happened here, and we are now poised to pass on the early results that are beginning to come in, which are showing that the research is on the right track and is poised itself to change the way the world will look at and treat eating disorders.

So that is a bit about who I am, where I am, what it is that I have done to land up here.  I am really looking forward to working directly with Belinda; we have shared conversation, stories, ideas, plans and many laughs already, and all without having had the opportunity (yet!) to meet on the same continental turf.  Given that I am based in London, and Belinda in Melbourne, we each spend a large part of the timezone in which the other is awake being asleep - but working with F.E.A.S.T. teaches you how to grab your moments; we are well versed in early and late day chat and we are confident of being able to manage to keep 24 hour coverage of F.E.A.S.T. affairs going fully internationally.

We are going to be ably guided and supported by the top team, whose names I hope you will click through from here and read about - they are a very cool crowd, and we could not begin to do what we do without all those others helping to prop up the table, keep us focused on F.E.A.S.T.'s mission, and accountable for everything that we do.

The shoulders of those that have gone before us, and that we are lucky enough to be standing on, are those of some of the most inspiring people that I have ever met.  From this vantage point we have been gifted a clearer view into a future that is better than any of us could have imagined just a few short years ago, but we know that there is more to be done before all that we would like to see is fully achieved.

I have made many good friends in my time with F.E.A.S.T., and am looking forward to meeting many more.  This dinner table is as broad as it is long, and I hope that it will continue to serve a wide variety and number of families.  I can be contacted via outreach@feast-ed.org - please do get in touch and let us know what you might need or want, and/or what you might like to do for F.E.A.S.T. - we depend on your input and support. 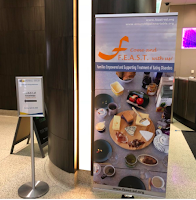 The F.E.A.S.T. community put together an all-day event in Chicago, one day after the International Conference for Eating Disorders ended, with little notice and a lot of heart. It was a day none of us will forget! We counted 87 people in the room, a generous mix of parents new to the topic of eating disorders and experienced parents, as well as clinicians and researchers and eating disorder advocates. Among our thanks for an informative and empowering day are the venue, The Conference Center At University Center. An ideal setting for our audience the room was lovely, the staff warm and helpful, and the catering was, as one participant described it, " quite the best packed lunch I've ever experienced at an organised event." See below for the final program, but suffice it to say it was a buffet of interesting ideas, people, inspiration, and accents! There were participants from at least nine countries, and there were tears of both laughter and sadnes
Read more